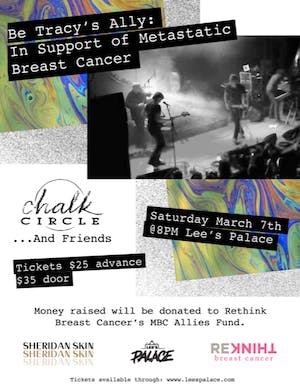 Chalk Circle is a Canadian alternative rock band formed in 1983 in Newcastle, Ontario. The band originally consisted of lead singer and guitarist Chris Tait, bassist Brad Hopkins, keyboardist Tad Winklarz and drummer Derrick Murphy. The band gained notoriety by the mid-eighties and charted radio success with songs such as “April Fool”, “This Mourning”, “Me Myself and I” and the T. Rex classic “20th Century Boy”. They headlined numerous National tours and toured with the likes of Rush, Crowded House, and Tears for Fears. In 2006 the band released the 20th Century Masters best of album and played its first reunion, a sold out show at Lee’s Palace in Toronto.

In 2011, Chalk Circle performed again celebrating the 40th anniversary of the Juno Awards. Original members Chris, Brad and Derrick are now joined by Jason Sniderman (Blue Peter) who has taking over keyboard duties since 2011. The band is excited to reunite for performances when possible.