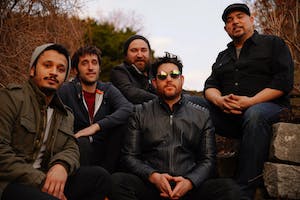 Formed in 2001 in Rochester, New York, Giant Panda Guerilla Dub Squad has been called “The Grateful Dead of reggae” and first received praise for their live show, combining world beats and reggae rhythms within jamband aesthetics. In recent years the band’s studio recordings, which showcase their songwriting and musicianship across all genres of roots music, have further cemented their legend as master innovators and artists. GPGDS’s sixth studio album MAKE IT BETTER was released September 16, 2016 on Rootfire Cooperative and debuted at #1 on the Billboard Reggae Chart. "There is a lot of intention in this release. We had a purpose to prove to ourselves recording this album [MAKE IT BETTER]. We wanted to know that we could put our heads down and do good work fast. It was a great release artistically. It uniquely sounds the most progressive of anything we have ever done while also sounding the most like our first album." -James Searl, Bassist/Vocalist.

Street Pharmacy was established in 2006 by singer, guitarist and primary songwriter, Ryan Guay. After receiving treatment for an acute case of encephalitis, Guay was left with the unusual ability to prolifically write, compose and produce music. Street Pharmacy mixes together the honesty of 90s alternative rock, reggae grooves and lightening fast lyrical flow reminiscent of golden age hip hop to forge a unique blend of reggae-rock that has kept their fans enthralled for over a decade. Guay and his four-piece band have released five full-length albums and have played over 500 shows across Canada and the US since Street Pharmacy's inception. Their newest concept record Delusional Discourse is due out in Q4 of 2020. Stay tuned for more tunage!

In 1972, Canadian legend Neil Young released the Harvest album. With tracks such as Old Man, Needle and the Damage Done and Heart of Gold (reaching the #1 spot on the Billboard Hot 100 chart). Almost 50 years later, Reggaddiction has reggae remixed the entire album, with support from 2019 Juno Winning reggae producer Dubmatix, providing a reggae dub mix interpretation.

Single releases from Reggaddiction’s Ganja Harvest album has received national radio play on CBC Radio. The full album is scheduled to be released in the fall of 2020 and the 6 song EP album is currently available on Bandcamp.

The Reggaddiction band has had a very exciting year. They opened up for Sister Nancy in February 2019 at Radio in Toronto, ON. The band played on the headline stage for the Toronto Beaches Jazz festival backing Otis Gayle from the legendary Studio One Label in Jamaica. Reggaddiction also backed Carol Brown for the Caribana kick off Celebration at Toronto’s Dundas Square. They are currently planning an album tour for 2020.