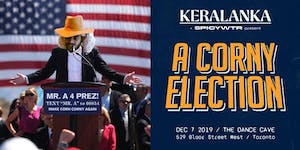 iCal
Google
The Keralanka Experience is a unique concert experience that brings together visual story telling with high energy music.

Keralanka has had an absolutely incredible 2019! With two sold-out shows in Toronto, the release of numerous bangers, and djAP finding love at last, the mandem have finally found their calling.

But with the year coming to a close, the Keralanka Universe faces an impending doom: Mr. A has decided to run for President 😱

Who is Mr. A, exactly? Keralanka's mortal enemy and the most totalitarian teacher in the land! Not only does this vile oligarch pride himself in his bigoted beliefs, but he's now decided to try and spread his poisonous rhetoric to the masses.

But together, we can save the Keralanka Universe! We need your help - join us at the third Keralanka Experience as we attempt to stop Mr. A from manifesting his dreams of becoming the most powerful dictator in the world while moshpitting the night away!

CORNY AS FUCK, BUT THE MUSIC BANGS.